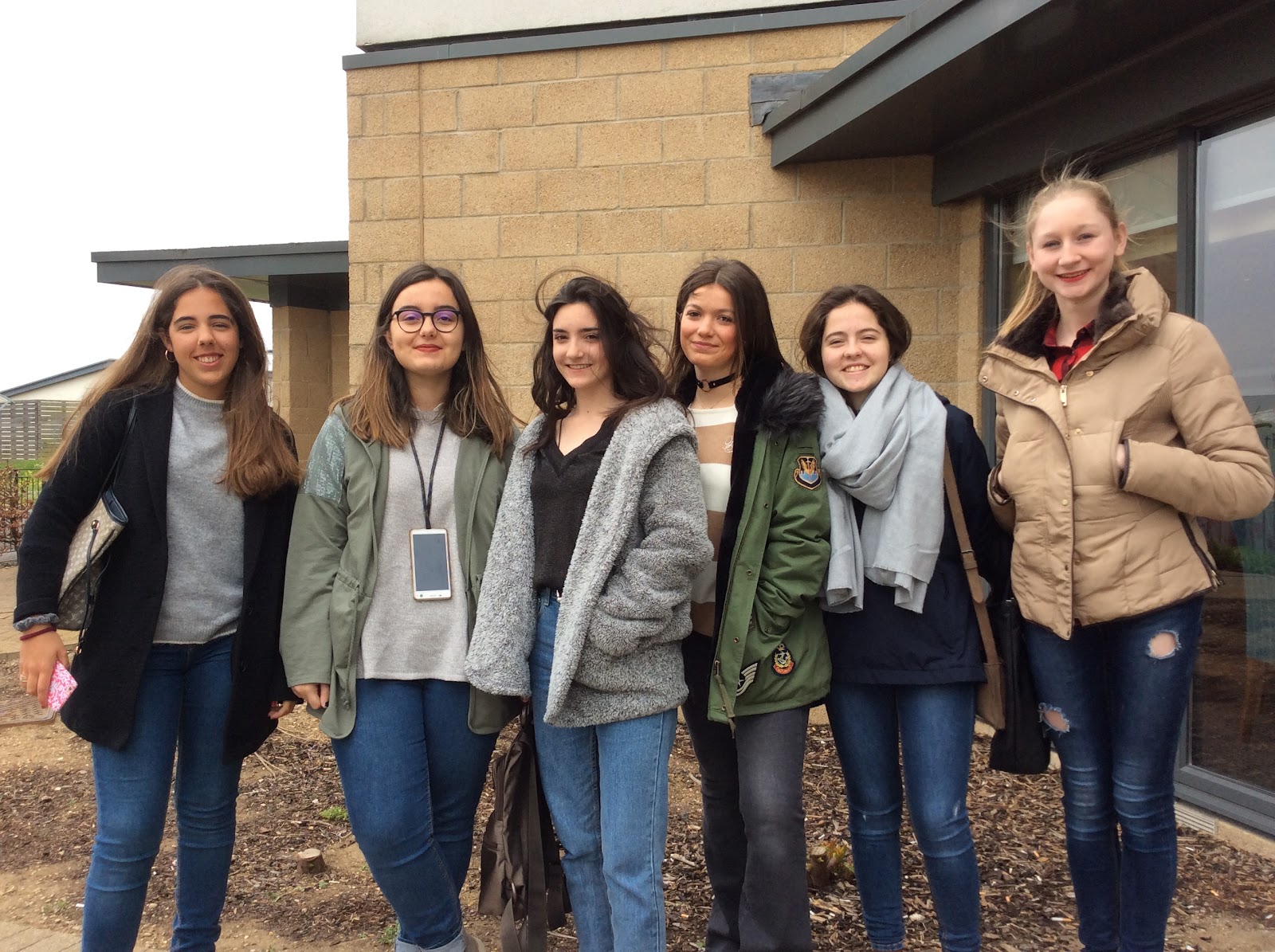 Patricia Gomez: Last Wednesday, 24 students took a plane to Brussels and then a train to get to The Hague. That first night we went to a nice Italian restaurant to have dinner and then we went straight back to the hotel as we were very tired. The second day, we went to the Peace Palace and they gave us a guided tour and told us a bit of history about the palace, the UN... after that, we were free to explore the city, so we went to the centre and we went shopping, got some food, took some pictures, some of us even went to the cinema, because all the films are in english there! On the third day, the conference started! We went to the school right after lunch and everyone went to find what they had to do: where their committees were, where the press team was, etc. Some time after that, the lobbying finished and they went to a church to have the opening ceremony. 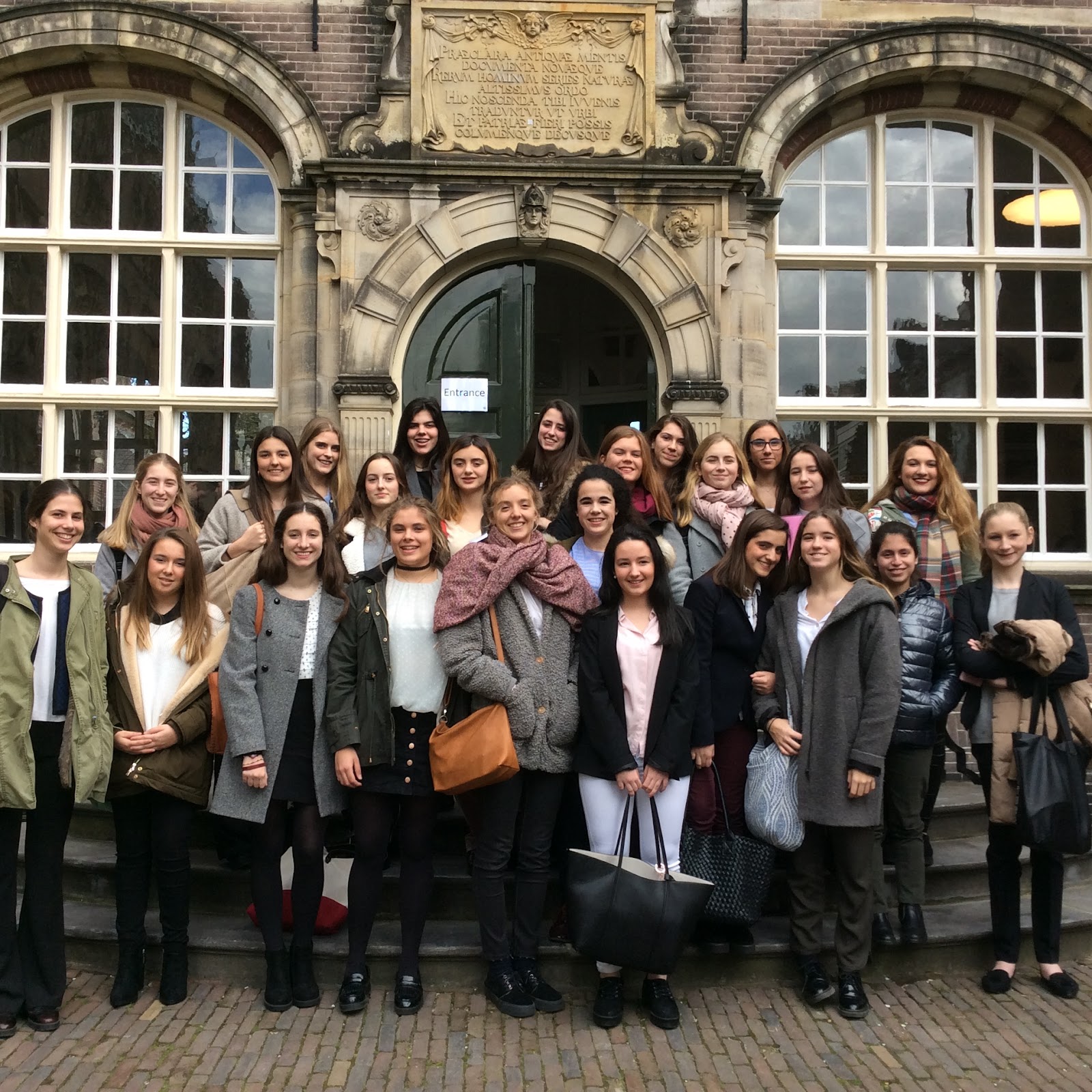 Then on Saturday we had to get up earlier because the conference started super early. It was a day of debating resolutions, interviewing people... but, then at night we went to the peer! There was being held the party everyone was looking forward to since the start of the conference. We danced, sung, and had a great time but by the time we got back to the hotel, we were exhausted! On Sunday we went to mass, which was really funny because it was in Dutch and we tried our best to understand what the priest was saying. After that we went to the conference but some of the girls were punished and had to dance or sing in front of their whole committee because of arriving late. That afternoon the GA took place, followed by an emotive closing ceremony where some people even shared some tears.

Check out at all the photos here!

We can’t believe MUN Bilbao 2017 is already over!

We’ve been working so hard to make this project come true and all we can say is we’re really proud of the outcome. Everyone had lots of fun and many delegates have told us they really enjoyed the conference. As this is our first MUN conference, there are some things that need to be improved, and we’re already working on how to make the next conference even better than this last one.

Another one of our goals was to make this conference different, a cultural experience as well as an educational one. That is why our opening ceremony was celebrated on Thursday in the Casa de Juntas of Gernika, one of the most important buildings in the Basque heritage. There were speeches from our Director Nicola Dignum, our Sec Gen Christina Connell, Ana Otaduy, the President of the Casa de Juntas and Tamara Zabala, the Deputy Director of the UN in Spain, among others. Afterwards, the Ambassadors for each country gave their opening speech.

When the Opening Ceremony was finished, we all headed to Ayalde for a cocktail dinner. The next day was all about informal lobbying and debating in committees, and after a whole day of hard work, the delegates were taken to Bilbao. About half of them visited the emblematic Bilbao Town Hall and the rest went on guided tours to get to know the city.
On Saturday, debate in committees continued until 2 pm, when the General Assembly started. The advisors visited Azurmendi, a Michelin Star and a sustainable development restaurant. At night, everyone attended a black tie dinner in Hotel Seminario, and danced till they dropped!

On Sunday debate in GA went on until the start of the Closing ceremony at 1 pm. Our Sec Gen gave an inspiring speech, announced the best delegate awards’ winners, and finally declared the first MUN Bilbao conference officially closed.

All we can say is we really enjoyed preparing this conference, and taking part in the extraordinary project these conferences are. We also were able to raise 530€ for the NGO Room To Read, contributing to the alphabetisation of boys and girls in Africa and Asia. As Christina Connell said in her closing speech, MUNers truly are changing the world. See you next year!

Next Thursday, 26th January, COAS is hosting the first MUN BILBAO conference in Ayalde. Munabe is taking part actively in this conference. Apart from the 15 delegates sitting in the different committees, seven of our students have been collaborating in the organization of the event together with seventeen Ayalde students.

Pablo Amorós (1 BACH), Ion Apraiz (4 ESO) and Pablo Amorrortu (4 ESO) will be working in the Press and Media Team in charge of taking photographs, interviewing and filming videos during the conference. On the other hand, Iñigo Echeandía (2 BACH), Eduardo Llop (2 BACH), Martín Ruiz (4 ESO) and Ignacio de Grassa (3 ESO) will be collaborating to make sure everything works perfectly during the four days of the conference as members of the Administration Team.

These seven students volunteered to help in the organization of the event searching for a new experience, different from the ones they face daily at school. Moreover, they are looking forward to living an enriching experience which could give them some insight on their professional future. Martín Ruiz, part of the Admin Team, has answered some questions for us:

How did you hear about MUN?
I first heard of MUN because of my teachers.

Why did you want to be involved?
Because I liked the idea of meeting new people from around the world and because I like to speak in English.

What are you expecting from the conference?
I expect everything goes like planned and everyone has a good time. What motivated you to become a delegate?
I went to the mini conference in Ayalde as an observer and really liked it, it was very interesting and I’m really into the international parties and I really like the idea of working in a team, making a resolution, debating it…

How have you prepared for MUN Bilbao?
With special sessions after class for one hour on Mondays and Thursdays. We’ve been working like that since September. Last Friday we had a session with a business communication lecturer from Deusto. We work by delegations and all together too we also work by committees.

What have you learned from MUN so far?
I’ve researched a lot, so I’ve learned a lot about true int. issues. I’ve also looked how to work in groups and how to debate and express my opinion through simulated debates.

What do you expect from the conference?
I have high expectations. It will be really interesting. I’m looking forward to the conference itself, different countries and also social events like Town Hall reception.

Are you nervous?
A bit, because there will be many different people but I hope I can do it as best as I can.

What are your future plans? Career?
For the future, I’m looking forward to Prague, because the experience of traveling to Prague is going to be amazing. I also hope this program helps me develop useful skills for uni and helps me with my professional career. I’ll study in Deusto, something related to business.